Stop by for a tour of our stunning rowhome models today! Visit our sales office at 84 N Oneida Court to view both Orion and Matador models. Open Tuesday - Saturday from 10am-5pm and Sunday/Monday from 12pm-5pm.
Contact Mary for more information: MAlbair@koelbelco.com or 303-300-8789 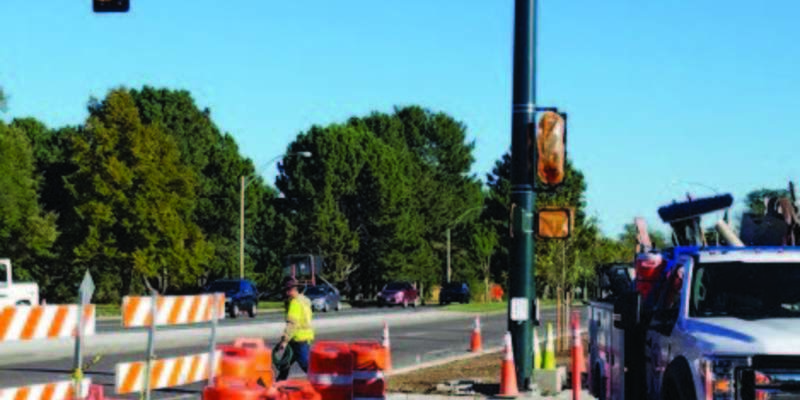 New intersection to open in October

The Lowry Redevelopment Authority began work last fall on the median and east side of Monaco Parkway as part of the Boulevard One Project. A new signalized intersection was built at Monaco and Lowry Boulevard and the east side of Monaco Parkway is being improved. The project is designed to disperse area traffic, add neighborhood connections and improve the parkway on the Lowry side.

The project is being implemented in coordination with the City of Denver Department of Transportation. It includes:
9/2018

• Narrowing and a break in the Monaco Parkway median to add a new left-turn lane for southbound Monaco traffic onto eastbound Lowry Boulevard.
• Removal of 9 trees on the median; 8 trees remain and 3 new trees were added.
• Significant landscape improvements are being added on the east side of Monaco Parkway, from Bayaud Street to
First Avenue, including:
• Overhead utilities were put underground
• Tree lawn was widened to 12 feet
• 27 new street trees are being added
• A new sidewalk has been installed, with links to Boulevard One trails
• 5.3 acres of new landscape behind the sidewalk will be added
• New traffic signals are being installed and will be operational when Lowry Boulevard opens to Monaco in October. At that time, new pedestrian crosswalks will be added at Lowry Boulevard and across Monaco.

Timeframe
Remaining landscape will be installed in spring 2019.
There will be traffic control during the project according
to city requirements. Work will be conducted between
8:30 am and 3:30 pm Monday-Friday.

All renderings and plans are artist’s conceptions and subject to change without notice. All measurements, locations and features shown are approximate and may vary. All prices, features and materials are subject to change and availability. Equal housing opportunity. Consult a sales agent for additional information.